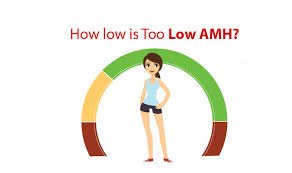 What is a good Amh Level for Ivf and What Should AMH Value Be?

Anti Müllerian Hormone (AMH), a type of glycoprotein, is found in both men and women.

What is a good Amh Level for IVF is one of the most frequently asked questions by families who want to receive IVF treatment.

In pregnancy, which occurs as a result of fertilization, if the fetus is male, the anti-mullerian hormone is secreted from the Sertoli cells in the testicles, preventing the development of female reproductive organs such as the vagina and uterus.

Since females do not have testicular tissue, AMH release does not occur, and the Müller canal develops, resulting in the formation of reproductive organs such as the uterus, fallopian tubes and vagina.

Thanks to this secreted hormone, the uterus and vagina are formed only in women and gender confusion does not occur. AMH is secreted by the follicle cells (ovarian granulosa) in women.

In female babies in the mother’s womb, AMH secretion begins just before birth, at the 36th week of pregnancy, and continues until the menopause period, which will be seen many years after birth.

Anti-mullerian hormone, which plays a role in the regulation of spermatogenesis, that is, sperm production in men, is effective in the selection of egg follicles in women. It plays a crucial role in determining which of the preantral follicles containing the eggs in the ovarian reserve will mature into an antral follicle.

In simpler terms, the anti-mullerian hormone determines which egg will mature and how quickly. The AMH test is a laboratory test that measures the level of this hormone.

What is the AMH Test?

Unlike men, women cannot produce eggs, which are reproductive cells in their bodies. However, it is born with the highest possible egg capacity. In this region, which is defined as the ovarian reserve, the eggs are contained in sacs called follicles. Each month, a certain amount of eggs mature in the menstrual cycle and the healthiest of these eggs are thrown into the fallopian tubes, where fertilization will take place.

The hormone AMH is produced by granulosa cells in the egg follicles in women. The secreted anti-mullerian hormone determines which egg will develop at what rate.

There is a direct relationship between the level of AMH in the blood and the number of eggs in the ovarian reserve. The AMH level does not change during the day or differ from month to month. It is not affected by the estrogen level at the blood level. However, as age progresses, the AMH level slowly decreases.

A low level of AMH indicates that the menopause period is approaching. Therefore, those who have an AMH test can have information about reproductive health. This is why the egg reserve test is popularly referred to as AMH.

The AMH test result, which measures the level of anti-mullerian hormone, which is extremely important for women of reproductive age, does not provide clear information about when the person will enter menopause, but provides important information about the status of the ovarian reserve, or in other words, in the evaluation of fertility. Also, this test can help people who want to know about what is a good Amh Level for Ivf.

What is a good Amh Level for Ivf

In terms of reproductive health, low values ​​in the AMH test indicate a low egg count in women. If values ​​below 1 are seen, it should be done quickly. Because this means that the eggs are running out. Women who have low AMH and want to become mothers should not waste time. Egg freezing is one of the recommended methods to preserve the chance of pregnancy at this stage.

AMH value above 4 ng/ml represents high AMH, range of 1.5 to 4 ng/ml anti-mullerian hormone normal AMH, below 1.5 ng/ml low AMH and less than 0.5 ng/ml very low AMH . These values ​​are also directly proportional to the fertility of the person. Apr 7, 2020.